Transform 2013: A Brain Trust of Ideas for Healthcare 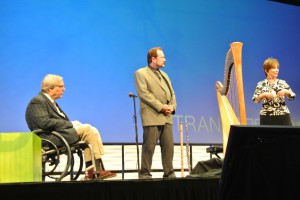 This past week my husband Dallas and I spoke at the Mayo Clinic’s Center for Innovation conference, Transform 2013.  This was the third year of the conference, attended by over 900 people with many minds and ideas colliding in a wash of TED-style talks.

Thematically, the conference is about transforming our current models of healthcare and care delivery systems into what is being called for.  That was the big question of the day:  “What are we being asked to do and what are the implications of each solution?”

It was clear from all the new tools at hand that it is easier to develop the technology than it is to get people to embrace, integrate, and use new tools.  Nancy Snyderman, M.D., of NBC said that new medical students will receive a hand-held ultrasound device rather than the traditional stethoscope.

Electronic medical records and smart phones have opened the doors to virtual doctor consultations and remote monitoring.  At some point, we will all be able to have our physiology monitored in real time where we are standing.

The questions regarding the high cost of Emergency Room care were right up front.  David Herman, M.D., was brilliant in claiming that rather than be upset that patients come to the ER for non-emergency room conditions, we should retrain the staff to deal with a broader set of symptoms.

If the people come to the ER because that is the only place they can come, then that is where we should treat them.   In other words, the system itself is nonresponsive to those it serves, demanding everyone adjust to what is clearly not “natural,” or viable for them.

Snyderman also was passionate about rumor and misinformation turning the clock back on diseases we had eradicated through immunization — whooping cough, measles, rubella, polio, TB.  She said that false claims, already discredited, have been met with passive response from the medical community, putting millions of children at risk.

No longer should the physician be the single person to govern medical care; rather a team approach using nurse practitioners and other non-medical, well trained persons should be involved in caring for a patient and their family.  It not possible for the physician of today to act like the doctor of old.  Although, house calls may return to the fold because seeing patients in their own homes is so much more effective than having patients come into a clinic or office.

Gary Slutkin, MD, executive director  of Cure Violence, described violence as a contagious disease.  People who grow up in violent families at 30% more likely to commit violence.  Mob rule:  someone(s) start a fight, and it grows like bacteria spreads.   In the same way the disease must be stopped, so violence must be interrupted to break the cycle.  The means of violence transmission:  witnessing, social learning, trauma, peer pressure. I would add, lack of alternatives, lack of support, hopelessness.

Cure Violence practices, holding violence as a health issue, reduced shootings in Chicago by 67%.  Retaliation is a violence relapse…it causes spread of dis-ease.   The culture of this country is about imprisonment and punishment rather than treatment or mediation…or addressing foundational issues.

While we continue to struggle with how to pay for everyone to have care, it was clear that there is enough money in the system now if the waste was recovered.  The example was a statue of Michaelangelo’s David.

Only 60% of the original block of marble was used to create the statue, with 40% wasted.  The waste is similar to the waste in our healthcare system, including insurance administration, procedures that are unneeded, and other inefficiencies.

I am swimming in more information than I can relay.  I am stimulated.  I am excited.  I am even more excited that our presentation focused on our work — on The C.A.R.E. Channel being a solid means of improving the patient experience and transforming our sick system into one that is caring.   John Hockenberry from NPR, was a brilliant moderator.

I am going to again state that when smart, motivated people get together to discuss what matters, the energy and ideas flow in one direction:  Take considered actions to transform the current entrenched system that has started an epidemic of inaccessible, unaffordable care.

Wish you all had been at Transform 2013.  Put it on your calendar for next year, September 7-9 in Rochester, MN.