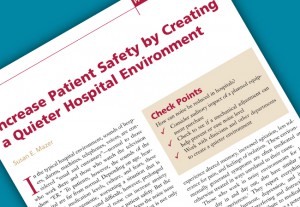 In comparing the state of healthcare in the 19th century with that of the 21st century, it is clear that the uncontrollable and seemingly unmanageable ways that noise penetrates the
hospital environment has changed for the worse. Florence Nightingale, whose environmental theory became the original basis for professionalizing nursing care, described noise
as “that which damages the patient.” At that time, the noise to which Nightingale referred included squeaking floors, brushing crinolines, appropriate and inappropriate conversations—any sound that resulted in feelings of “apprehension, uncertainty, waiting, expectation, fear or surprise.” Today, hospital noise has been studied according to its physiological and psychological outcomes:increased respiratory rates, heightened blood pressure, increased heart rates, and increased stress.

While some improvements have been made in acoustic treatment of corridors and rooms, they are not industry wide nor are they hospital wide. Generally, the improvements have been made in one unit of a hospital, clinical area, or clinic. Meanwhile, negative auditory factors have multiplied: growing populations, higher patient acuity levels, increased pressures on staff to perform, and the introduction of more technologies.

Some new technologies have replaced older ones: Overhead paging has been traded in for mobile technologies, and the irritating broadcast of announcements has been replaced by the near-constant use (in corridors and rooms) of cellphones or other individual communication technologies. Each new technology has its own environmental impact, requires its own utilization policy, and introduces new risks as well as benefits. The studies to date have merged the technological sounds into the generic auditory environment and the outcomes remain the same: Hospital noise is pandemic.

The auditory environment of the 21st century hospital is substantially louder, more complex, and more difficult to control than that of Nightingale’s time. Intensive care unit (ICU) psychosis or delirium has been directly linked to environmental stressors—noise, sleep deprivation, and social isolation, being primary. The costs related to sleep deprivation, agitation,stress, and lower pain thresholds that are a result of ambient hospital noise are measured in additional medication, length of stay, and subsequent complications.