May is National Nursing Month in celebration of the birth of Florence Nightingale.  Each year I renew my interest in her work, am in wonder of her insights, and remain stunned at what she knew that we are still learning.

Nightingale was born into an Aristocratic family; wealthy, well educated.  At the time — in the middle of the 19th century —  little was demanded or expected of her other than marrying into the same social class and giving birth to the next generation of aristocrats.

However, she took a different position, questioning this very narrow role for women and wondering why it was that those with means well beyond their needs had little concern for the poor, the sick, the orphaned, and the destitute who lived just on the other side of the gates that surrounded the family estate.

It is clear that this question is one that has yet to be answered and Nightingale would be well within her rights to ask again and again of the same people, about the same social disparity.

As I write this, we are looking at an international crisis in many countries regarding social welfare, support for the poor, and a safety net for a middle class weakened by the current recession.  For some the recession may not end for years; for others, it never happened.  Unlike the Great Depression, this recession did not impact everyone the same way.

Amidst the economic challenge is the very difficult and un-resolvable dilemma in the U.S. healthcare system. It makes me think of the automobile industry that was bailed out, the banks that were bailed out — the “too big to fail” excuse for billions  of dollars in federal funding to ensure the whole financial system did not crash.

Well, it is clear that our whole healthcare system is on the brink of failure and the push is to let it fail.  Why are the lives at stake not as important as the money at stake?  Why is it that the sick kids invisible to the system because their parents are invisible, are so expendable when the stock market, and the various big banks were clearly not? 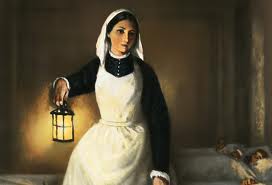 Nightingale would look us all in the eye in disgust for values gone awry.  She would say to each of us who have so much more than we need that we should be ashamed.

And, she would look at the casualties of the many wars we have been engaged in the past 10 years and fight to her last breadth for their right for the best care, as she would fight for a patient’s right to the most compassionate and highly skilled clinician to help them recover.

Furthermore, as she would defiantly stand against a system that at that time and at this time,  would rather let the sick die than change, daring us question the tenet that receiving care is a human right, not an economic privilege.