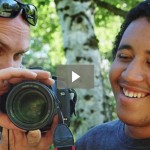 May 1, 2015 – At age 16, Matt was an average teenager. He went to school, had homework, and spent most of his free time hanging out with friends at a local skate park. But a few years ago, after a glorious day of skateboarding, Matt went to bed with a simple headache and woke up paralyzed.

While in the hospital, Matt discovered The C.A.R.E. Channel, which helped him cope with his situation and gave him hope for the future.

His story is the first to be released as part of The Story Project, a video documentary initiative from Healing HealthCare Systems, producers of The C.A.R.E. Channel.

“For the past 24 years, we’ve been collecting heartfelt stories from patients and families about how The C.A.R.E. Channel helped them during their hospital stay,” said Susan E. Mazer, Ph.D., President and CEO of Healing HealthCare Systems. “Staff, too, has shared remarkable stories. We decided it was time to capture some of them on video.”