Nothing But Words: Does HCAHPS Truly Measure the Patient Experience? 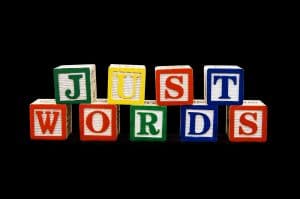 Contrary to what some might think, the patient experience movement wasn’t inspired by just one event or just one speech. It has a history, a kind of genealogy.

From Wikipedia: “The word patient originally meant ‘one who suffers’. This English noun comes from the Latin word patiens, the present participle of the deponent verb, patior, meaning ‘I am suffering,’ and akin to the Greek verb πάσχειν (= paskhein, to suffer) and its cognate noun πάθος (= pathos).”

So, the patient is the person who suffers and whose suffering caregivers are committed to relieving.  This relationship existed long before curative medicine, insurance, or HIPPA.

What About Patient Satisfaction?

Patient satisfaction originated with the work of Irwin Press and Robert Ganey who developed a survey tool in the 1980s.  It was the first time patients were asked whether they were “satisfied” with how their suffering was relieved.

The HCAHPS  survey is, then, the instrument used to measure and quantify on a comparative scale, the state of what happens to patients when in the hospital.  It asks about pain, but not about suffering.

It consists 32 multiple-choice questions that are sent out for response following a hospitalization.  So, the patient doesn’t respond in real time, but rather as a memory, a recollection.

The HCAHPS survey leaves much unanswered. For example, it asks: During this hospital stay, how often did doctors treat you with courtesy and respect?

A patient might think, “What if the doctor treated me courteously and respectfully, but not often enough? I only saw him twice during my stay, so, not enough. Plus, the time I had was too short to ask questions. And, yes, he was nice, but I did not understand what he was saying to me.”

The information that healthcare providers need to improve the patient experience isn’t found in the answers to the multiple-choice questions. Finding out what’s behind the answer is what is really important.

When scores are low in the “quiet at night” question, what does that mean?  Does it really just mean that staff has to be quieter? Or does it also mean going beyond just providing a bed and turning the lights off to make the nights more comfortable?

The patient experience unfolds moment to moment over each 24-hour day.  Given that HCAHPS is about a “look back,” patients will recall moments when they had strong feelings, good or bad.

They will recall events, perhaps not fully accurately, but whatever they remember happened is what happened for them.  And, the 32 questions may not even touch what matters to them.

Don’t Ask If You Don’t Care

After I was in the hospital a few years ago, I did not receive an HCAHPS questionnaire. But I was called at least three times by someone asking about the quality of my care.

When I finally responded and described in detail about my experience as a patient, the person on the other end of the line said, “I am in Seattle. I do not know the doctor or the hospital.  I will try to pass your message on.”

This was infuriating.  Why ask if you don’t want to know? And don’t insult patients by having someone call who does not care.

It includes every attempt to find out what happened during their hospitalization, the response to that information, and how patients feel after sharing such personal information. How all of this is handled informs the next patient’s experience.

And, more important, it also verifies whether the hospital actually does care.

Worse than asking patients what happened during their hospitalization is ignoring what they say and leaving them without any evidence that what they shared matters.