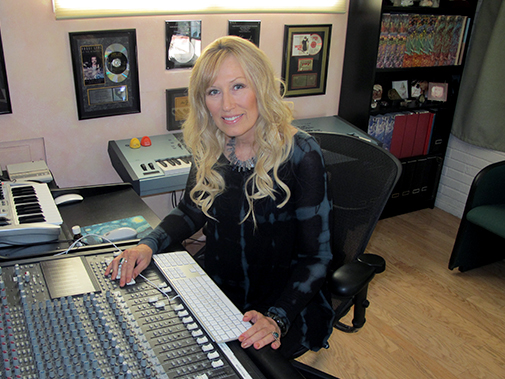 Note: Congratulations to Darlene, whose album “Tranquil Times” received the Independent Music Award for Best New Age Album.  Darlene’s music career has been primarily as a vocalist.  In this essay, she relates how her new instrumental album was created to promote healing through music.

Prior to moving from my hometown Chicago, I sang a coloratura aria with the Chicago Symphony at age 19 and was singing and playing classical piano and harpsichord with regional orchestras, earning my Bachelors Degree in Music Education and Masters in Voice. Upon arriving in Los Angeles, that classical piano quickly turned to jazz, rock, and improvisational.

I sang on thousands of movies, records, commercials, and television shows. Later on in my career, I was chosen to be the featured soprano soloist singing “Aria” in Yanni, Live at the Acropolis. After that, over a billion viewers worldwide knew me as that tall blond singer.

Just about the time I was going to start on my first classical-crossover vocal/piano album, “Infinite Voice,” a horrible accident left me without the use of my dominant, right hand for almost five years, with the ring finger remaining permanently crooked.

This was the second serious accident on that hand where the doctors said I would never play again and both times in my life, I maintained courage and persistence in practicing my music, bringing that hand and my spirits back to life. Even as a child, my mother would comment on how I would take my frustrations out on the piano, playing for long periods of time as it calmed me down and helped me focus again.

When I finally had the confidence to play piano in front of an audience again, I wrote “Lucid See,” the one piano instrumental that appears on my previous “Solitary Treasures” album.  A few years later, my radio promoter, Ed Bonk, who also knew of my work as a sonic therapist, thought my music would be great for The C.A.R.E. Channel and recommended I contact Dallas Smith at Healing HealthCare Systems.

To my surprise, Dallas liked the piece so much that he asked for a whole album of my instrumental music! At the time, my mother was slowly passing away in the hospital and then in hospice from a brain tumor, ultimately rendering her unable to speak or move her left side.

She always loved my vocal albums but the full impact of the emotion of the voice on certain songs had become overwhelming to her.  So I set out to create an album of beautiful instrumental music that would soothe her soul and bring her peace and joy — letting her know that all those hours making me practice piano as a kid paid off, as well as to fulfill the request from Dallas.

As I began producing “Tranquil Times,” one by one, each piece evolved into somewhat of a self-healing tool for me, becoming an album of healing for others as well.

My niece, Courtney Jacob, plays flute on two of the pieces on the album. I knew mom would love hearing us play together. Two days before her passing, she got to hear us. I made it to Chicago, new album in tow, just in time.

For one rare lucid moment, unable to speak, tears streaming down her face, with one blind eye and only one hand able to move, my mother signaled her love for the music with piano and harp playing motions so we would know she “got it.”

Many of the staff at the hospice came in to see where the beautiful music was coming from. They all commented how they noticed that the music soothed them and their patients and helped them work, relaxed but with focus. Music truly is THE best medicine, with only positive side effects! Tranquil Times for all, indeed.

Please visit Darlene’s website for more information, to purchase her music, or to contact her for bookings.