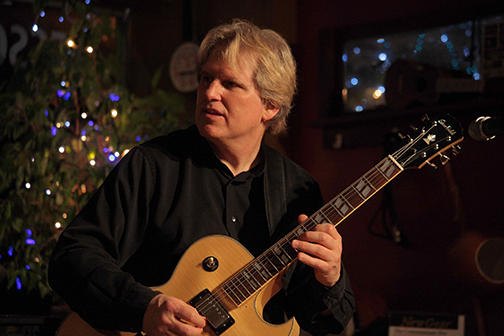 I grew up in San Francisco and first became aware of music when my older sister played her 45s on a small record player that my family had acquired. For many years, I was transfixed by music, although I never attempted to play an instrument until age 12, when my parents brought a piano into the house.

When I was in Junior High, I had a few friends who played the guitar and I became more interested in the instrument. After being invited to one of my first rock concerts, I realized the guitar was what I really wanted to play.

But the piano was my first instrument and I really liked writing music on it. Playing both instruments has allowed my composing to be broader based. So much of today’s music starts with a keyboard, which has had the same impact that the guitar had in the 1960s and 1970s.

Many years later, I had a very serious diving accident, which put me in the hospital for the better part of a month. During that time, I was working on what would become my third CD, “Autumn’s Whisper.” Music really helped me in my recovery.

The hospital played this beautiful calming music for the patients over its sound system. When I was able to play again, I decided to make a CD that would be like what I had heard in the hospital.

Having my music now being played for people in hospitals is pretty amazing, because when I made that CD and subsequent others, I never thought they would be used in the same setting that had inspired them.

After I completed “Autumn’s Whisper” during my rehabilitation, I received a call from a friend from high school. He had met Dallas Smith, a fellow musician from Reno, NV. I sent some of my music to Dallas, and he wanted to know if I would be interested in featuring my original songs on The C.A.R.E. Channel.

Many people who have heard my music have told me how it relaxes them, and that it inspires them with its spiritual calmness. Without the healing I had gone through after my accident, my music may have come out quite differently.

I am currently working on a new CD, whose theme is calmness and clarity. I am looking forward to sharing it with Healing HealthCare Systems for The C.A.R.E. Channel so others can enjoy it and receive real benefit from it.

My CD releases can be found on my website, CD Baby, and iTunes.