What can I say about Rocky Mountain National Park (RMNP) besides, more? It was more than we expected. It was more epic than we realized. More beautiful than what we pictured. Basically more, um, more-er than what we thought was possible.

Well, except oxygen. There’s less of that actually. What I’m trying to say is that if Sly Stallone and Indiana Jones had a baby that was raised by wolves, that baby would be Rocky Mountain National Park. Excitement, adventure, and toughness. 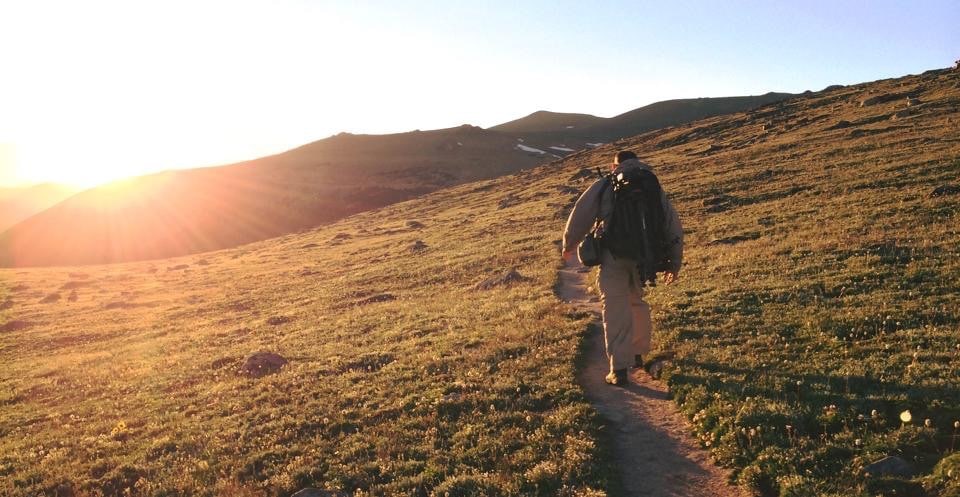 Hiking the Ute Crossing to 12,000 feet. One of the many trails stretching 350 miles through the Rockies.

What’s great about RMNP is that it has something for everyone. Want to go on epic overnight hikes to pristine alpine lakes that are basically on the summits? Done. Or would you rather drive to the mountaintops and look at the world from 12,000 feet while eating a bag of Cheetos? Also done. 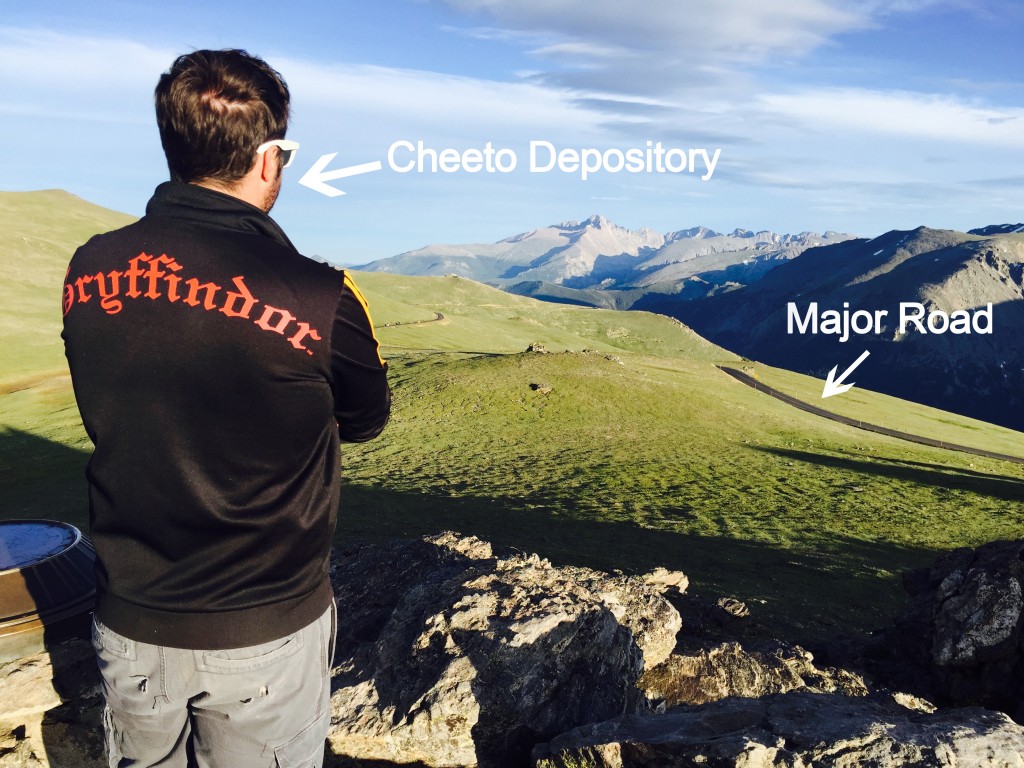 10 points to Gryffindor (Ford) for doing it right.

But let’s start with the obvious. You aren’t called the “rocky” mountains without more than a few mountainous, rocky land features. But these aren’t simply mountains. They are Greek gods towering into the heavens to command their dominance over Colorado.

The easiest way experience their splendor is to drive the Trail Ridge Road.

Just name a famous stretch of road in the U.S. (Going-to-the-Sun Road, Big Sur, Tioga Pass), and we’ve most likely been on it. We left Colorado wondering if Trail Ridge Road might be the best.

It’s a 50-mile stretch that runs straight through the heart of the mountains from the Beaver Meadows at the east entrance to Kawuneeche Valley in the west. Reaching an altitude of 12,183 feet with numerous spectacular turnouts along the way, it has to be the easiest vista to effort ratio in all the national parks. 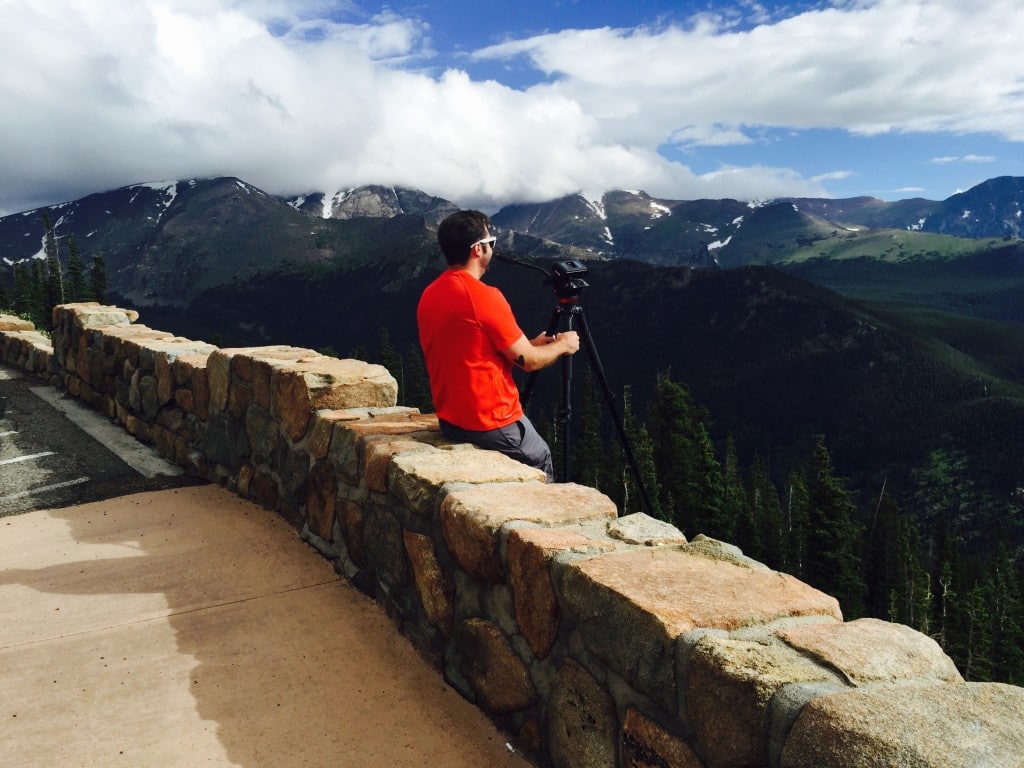 Sometimes when it’s too easy, you must manufacture the danger.

We probably traversed this rugged road 10 times, but none was more magical than the first. It was a crisp morning and a storm was rolling in that created beautiful cloud patterns hanging just over the mountains. We figured it would be a perfect time to see what things looked like at 12,000 feet. The decision paid off with a spectacular display of interesting cloud formations.

We were able to get beautiful light all the way through noon, which is highly unusual, making it possible to get a great shot of the Forest Canyon pullout that is notoriously hard to capture. 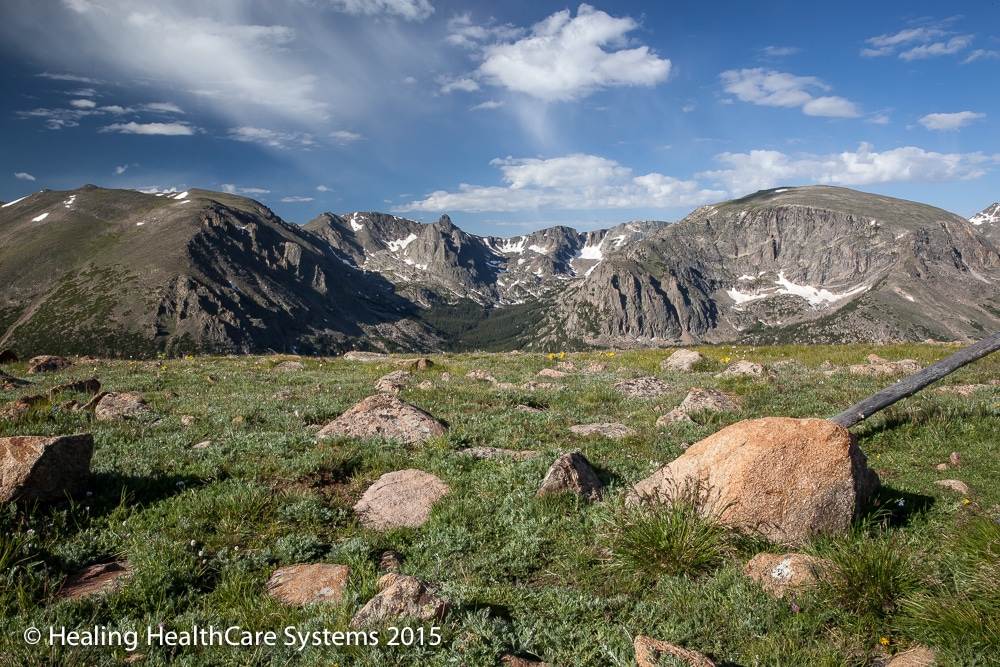 Trail Ridge Road even made animal watching a breeze by providing a herd of gorgeous elk right along the road. We were able to get video and photos of them fairly close up with various mountain backdrops. I especially like this one of a lone elk gazing off into the distant mountains. 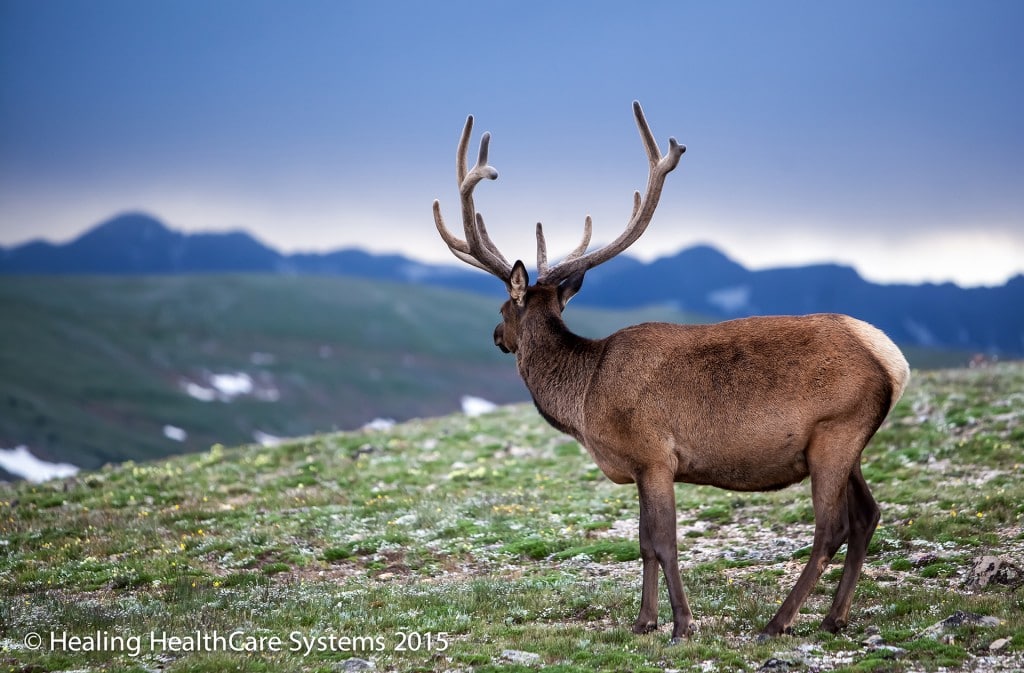 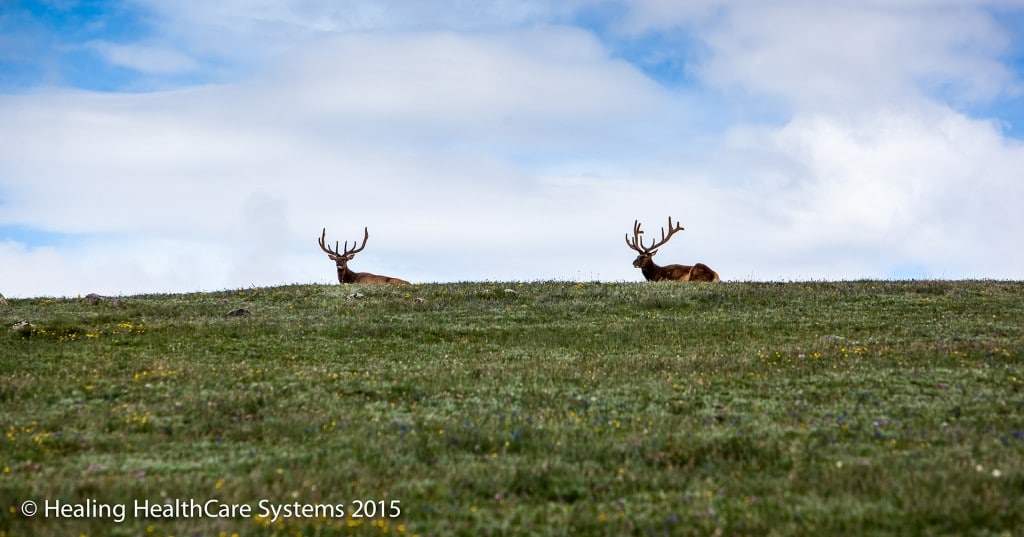 But really, you don’t even have to leave your car to catch a shot sometimes.

An alternative route to the top of the mountains is Old Fall River Road, a winding, one-way dirt road. This is a fun little detour that cuts through the thick of it and passes the Alluvial Fan waterfall and Chasm Falls. There are plenty of elk viewing opportunities along this road as well.

We were lucky enough to catch a moose at the Sheep Lakes. It would seem you should see big horn sheep at Sheep Lakes, but as it turns out sheep are jerks and don’t like being videoed, but ‘ol Bullwinkle here made the trip worth while.

It’s also worthwhile to mention that watching a moose run is a must see. It looks like some kind of odd spider alien with the way its skinny leg joints move under its giant barrel of a body. 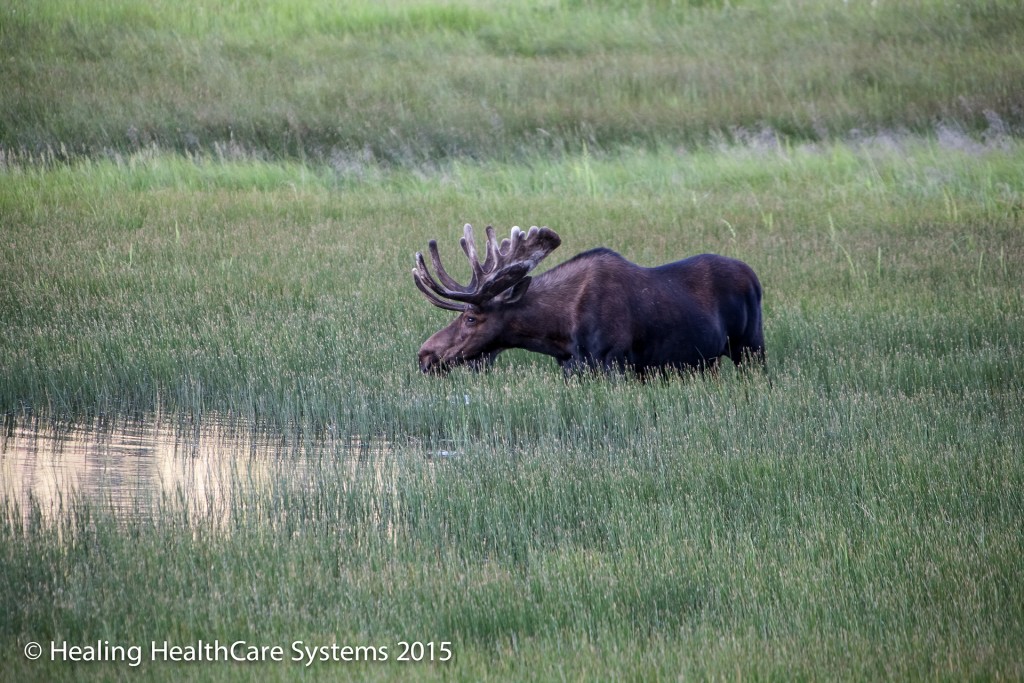 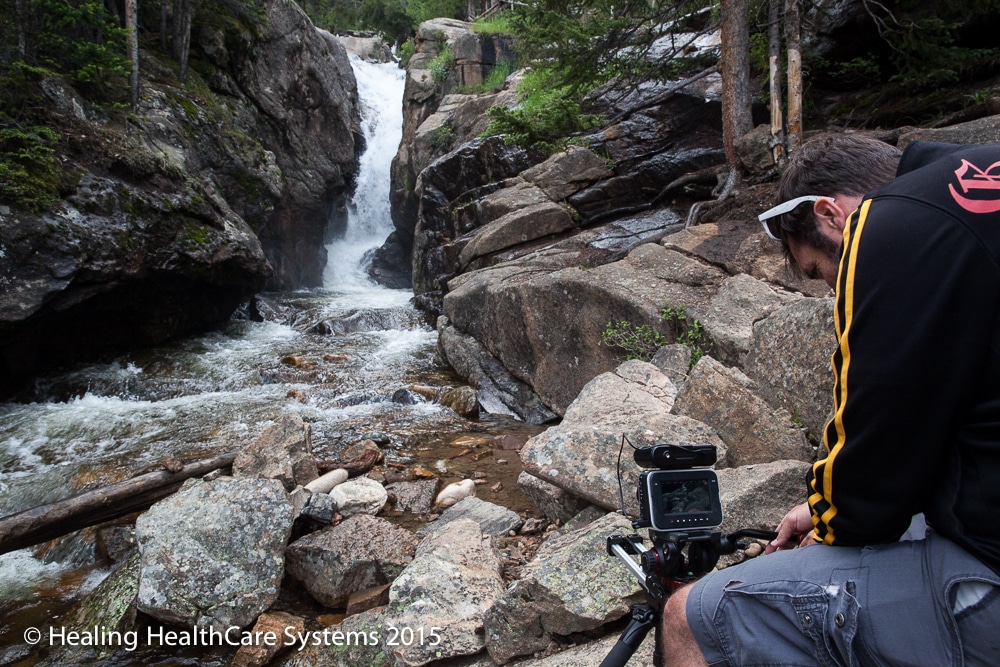 Trail Ridge Road was certainly inspiring, but just the tip of the mountain top, and we can’t really do a C.A.R.E. Channel shoot without getting out into it.

The deep interior of RMNP is a crazy web of networked hiking trails that go on for days through various valleys, past rivers and alpine lakes and tarns — right to the foot of the mountains and up to the peaks. They’re all very well mapped out and you can get all the info you need from the Visitor’s Center. You can even get a look at pretty much all the trails on Google Maps. Early on, we targeted the Bear Lake Trail as a must do.

Between Bear Lake itself, Emerald Lake at the end of the line, and all the little rivers and waterfalls in between, this hike is stacked with photo opportunities. For us, however, it was really about getting to Dream Lake for sunrise, when the lake would be glassy and reflect the warm morning glow of the mountains.

We didn’t get the glass, but an interesting cloudscape helped Dream Lake live up to its name. Also helping was the fact that our hard drive later failed and we lost all the video we took, rendering this beautiful location to that of a dream. 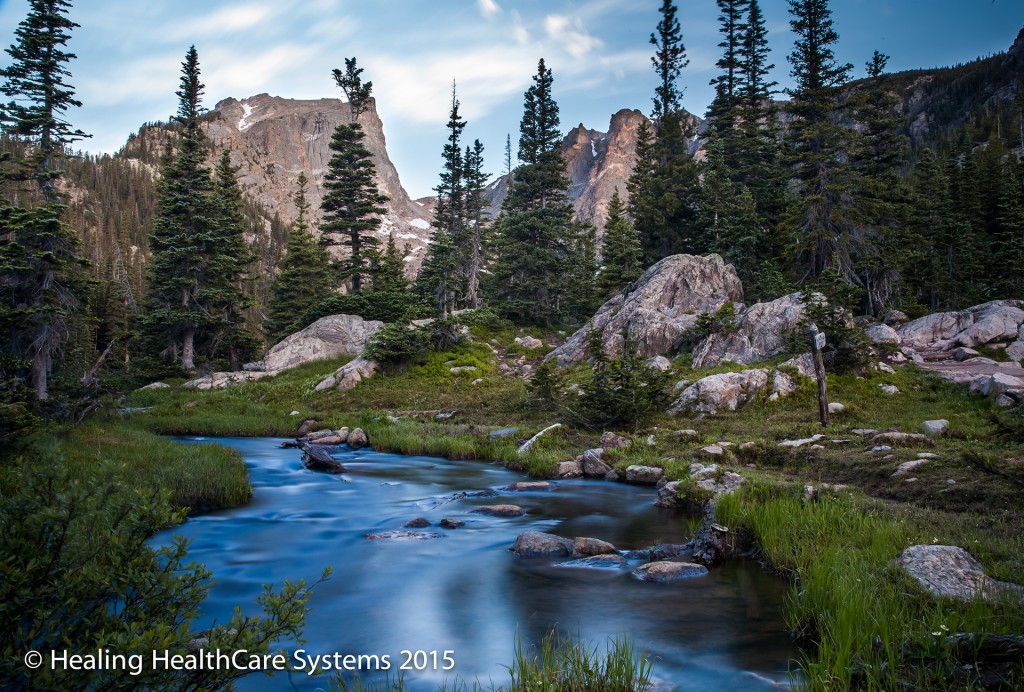 A river on the way to Dream Lake.

There are many other dream locations from this epic adventure, so be sure to check out the images on the gallery. And follow all of our adventures in this here bloggy blog.

We run our feet ragged for your entertainment.