Ever since I started working as a C.A.R.E. Channel producer, I’ve dreamed about shooting Iguazu Falls and the Patagonian Andes.

Respectively they are two of the most renowned natural wonders in the world. So why not just knock ‘em both out in the same trip, eh? Sucks to your moderation, I say! So off adventuring we go!

We start with Foz Do Iguacu in Brazil. 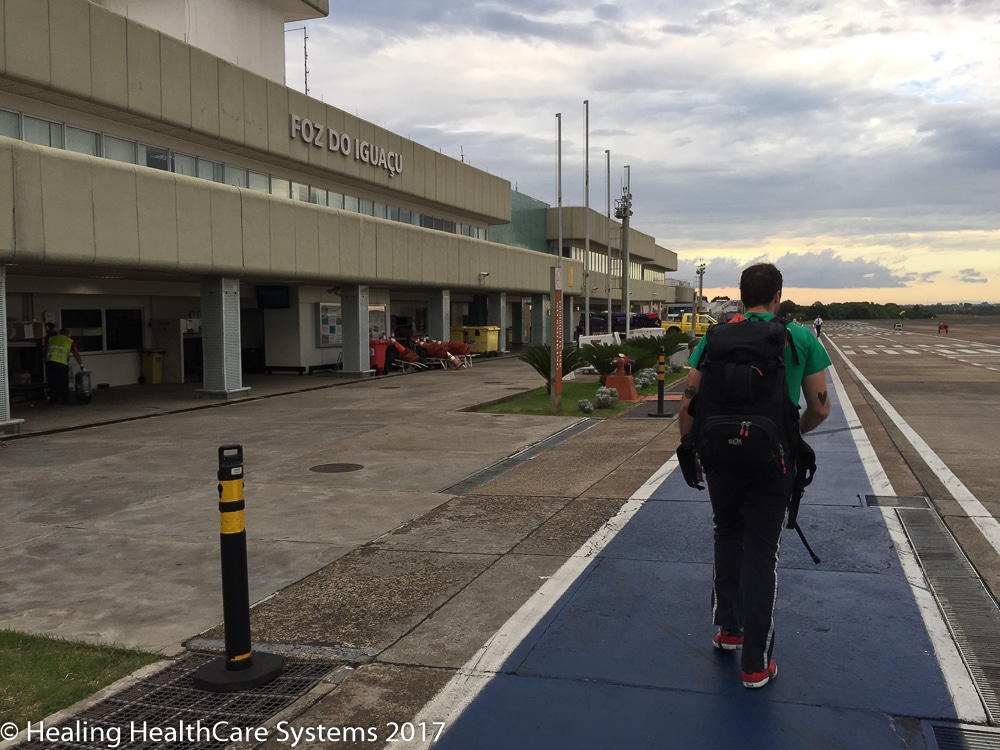 In hindsight, Iguazu Falls is not exactly “on the way” to Patagonia. I don’t know how well you know your geography, but Argentina ain’t small, and our Patagonia locations were down near the bottom.

Just getting from location A, to location B would’ve classified as our second longest trip ever. Luckily we made friends that helped us along the way. 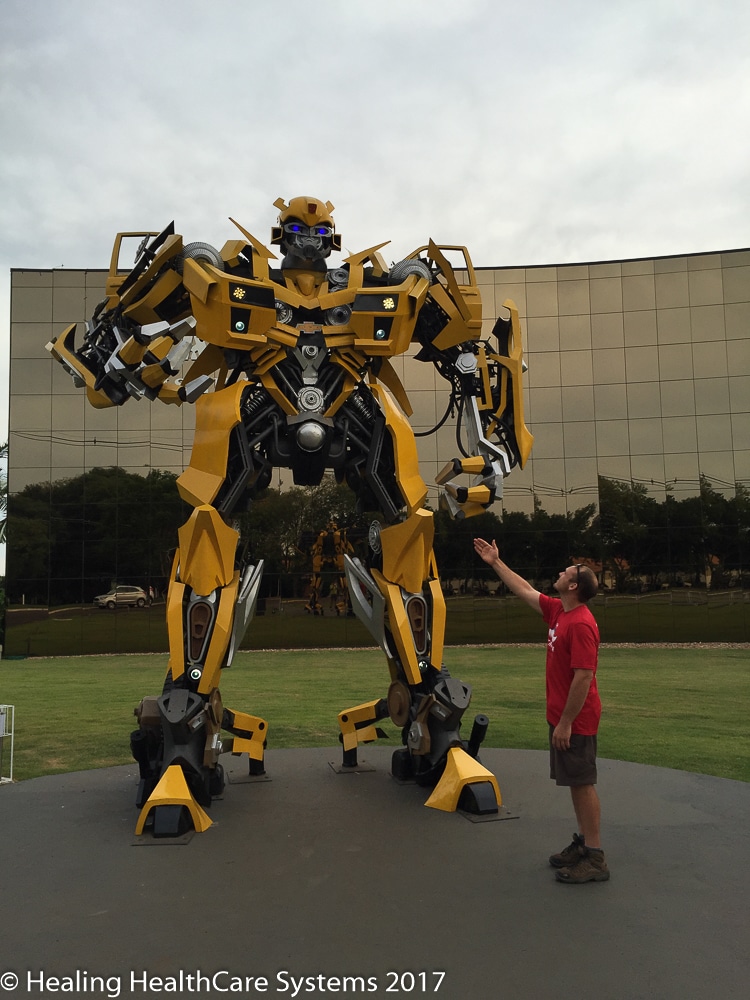 Iguazu…Iguacu? Iguassu? The waterfall so large that they named it three times.

Whatever you call it, it’s unbelievable. Standing at 269 feet tall and running 1.7 miles of river (yes miles, that is not a typo), and spanning the border between Brazil and Argentina, it is the largest waterfall system in the world. 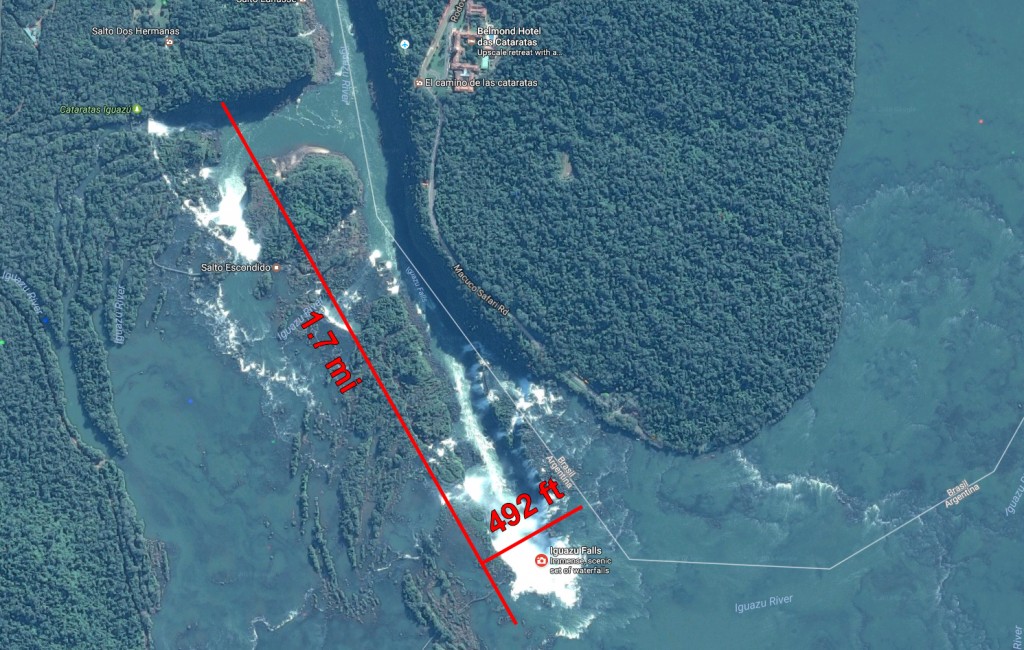 So large that photographing it only serves to diminish its visual impact. Unless you can get an aerial shot, you’re relegated to dissecting it into smaller, yet still massively impressive subsections of waterfall. 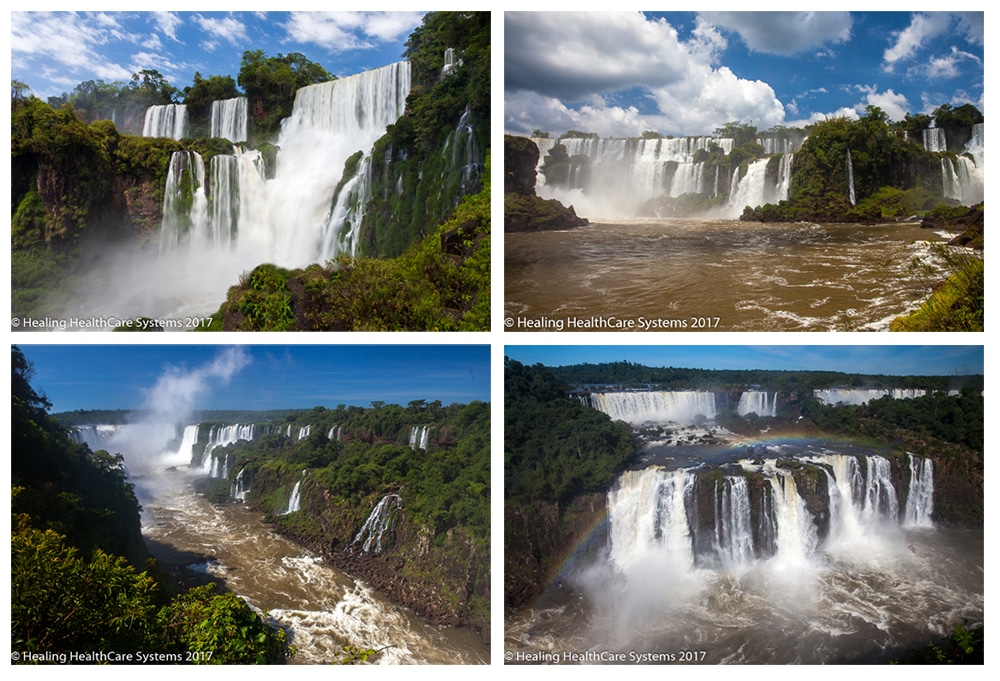 The different sections of individual breaches over the cliffs do, in fact, have their own names, but do not let the photographs of these “waterfalls” obscure how large this thing is. Every waterfall we’ve ever shot has taken us maybe an hour or two to cover.

We spent two days at Iguazu! The only way to get a good idea of what it looks like is to take the tour. Since it’s a little difficult to just hop on over to Brazil, I went ahead and did one for you.

The park is treated more like a theme park with gates and shuttle busses. And, it doesn’t even open until 9 a.m.! 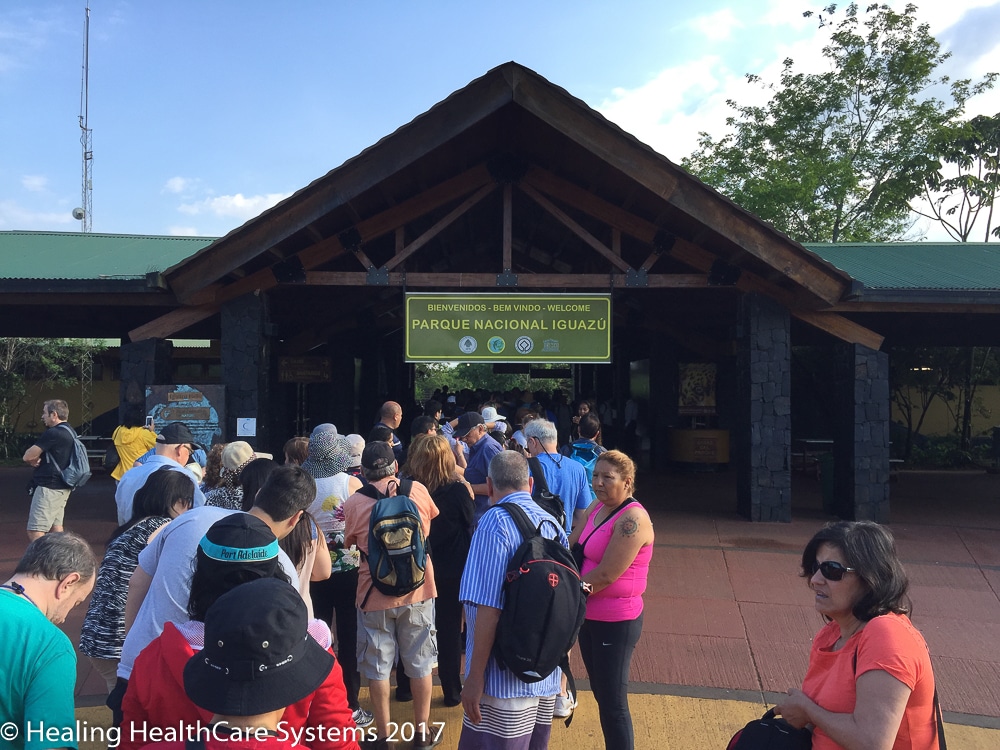 We started our first day on the Argentinean side. There was plenty to explore with hiking trails that stretched the entire length of the falls from the furthest eastern point at San Martin to the glorious roaring head at Garganta do Diabo (the Devils Throat).

Of course, the best part of this side of the falls is the little train ride into the trails. 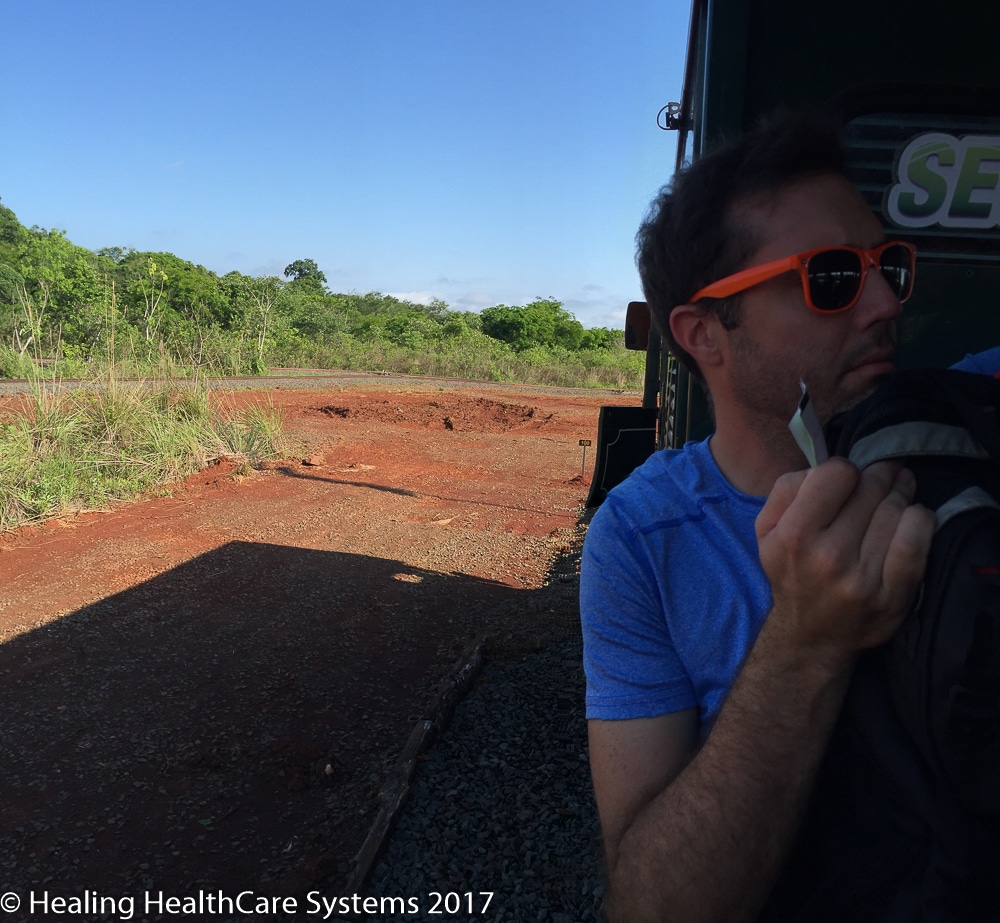 Or the Monkeys… maybe it was the monkeys. They steal the show everywhere you find em. 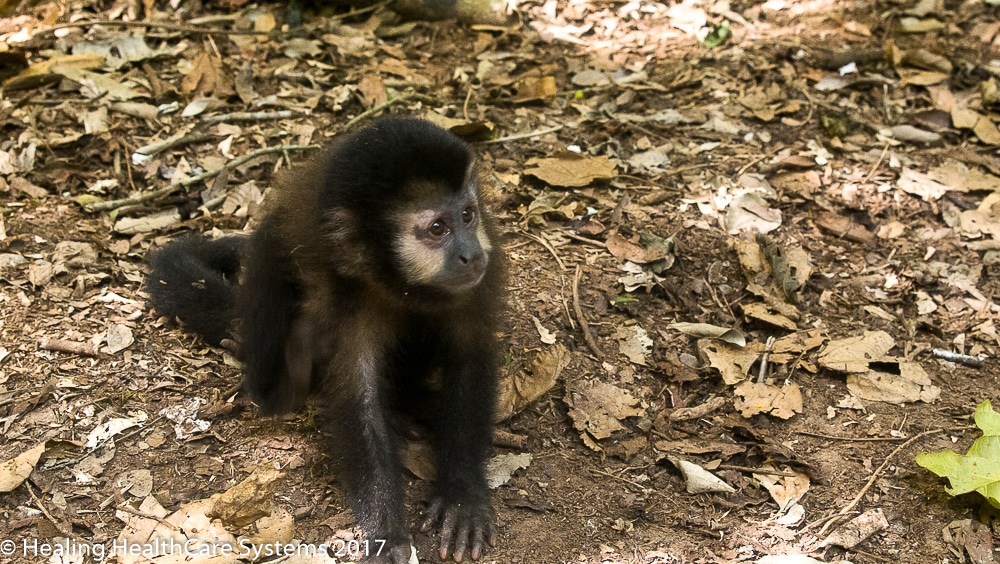 Oh, and the coati. Mischievous little cuties that like to get into your stuff.

But after the train… and the monkeys… and the coati, there are waterfalls.

The first stop was a little double waterfall separate from the Iguazu system called Dos Hermanos. And when I say little, I mean it’s still bigger than your average waterfall. This incidental little offshoot would’ve been a main attraction on most other shooting trips. 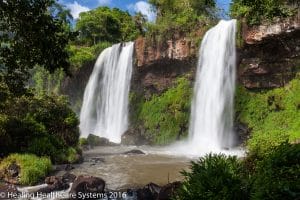 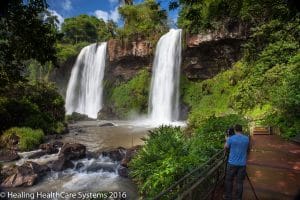 From there it was a short walk to the San Martin section of the falls. 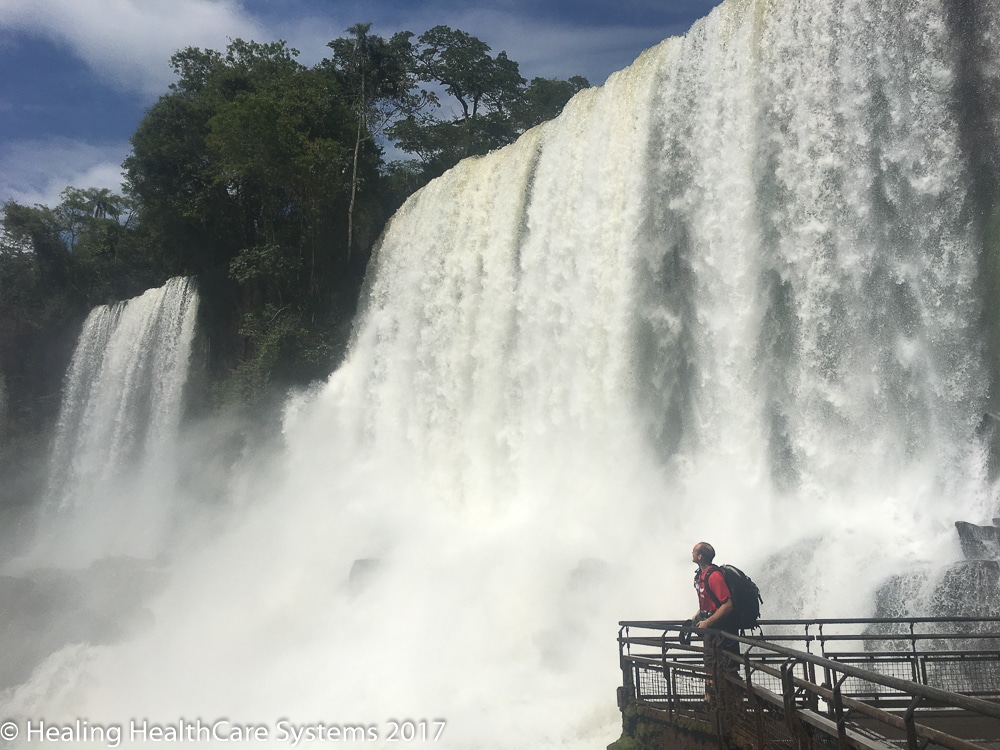 This one section, by itself, would be the largest waterfall we’ve ever shot. Am I starting to get the point across? IT’S BIG! 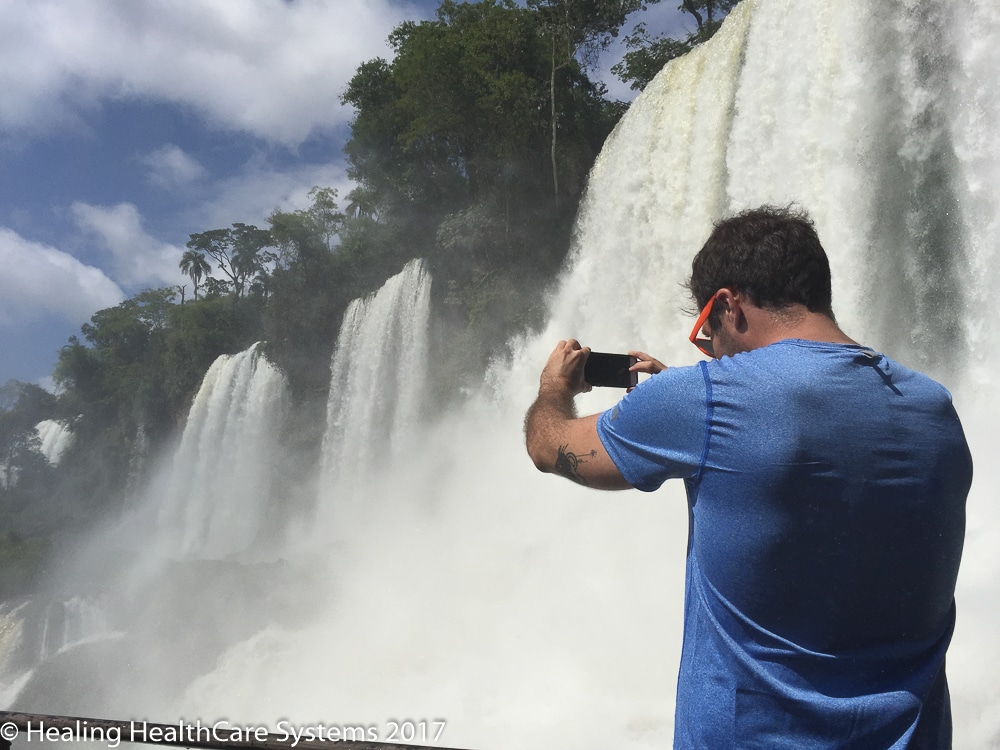 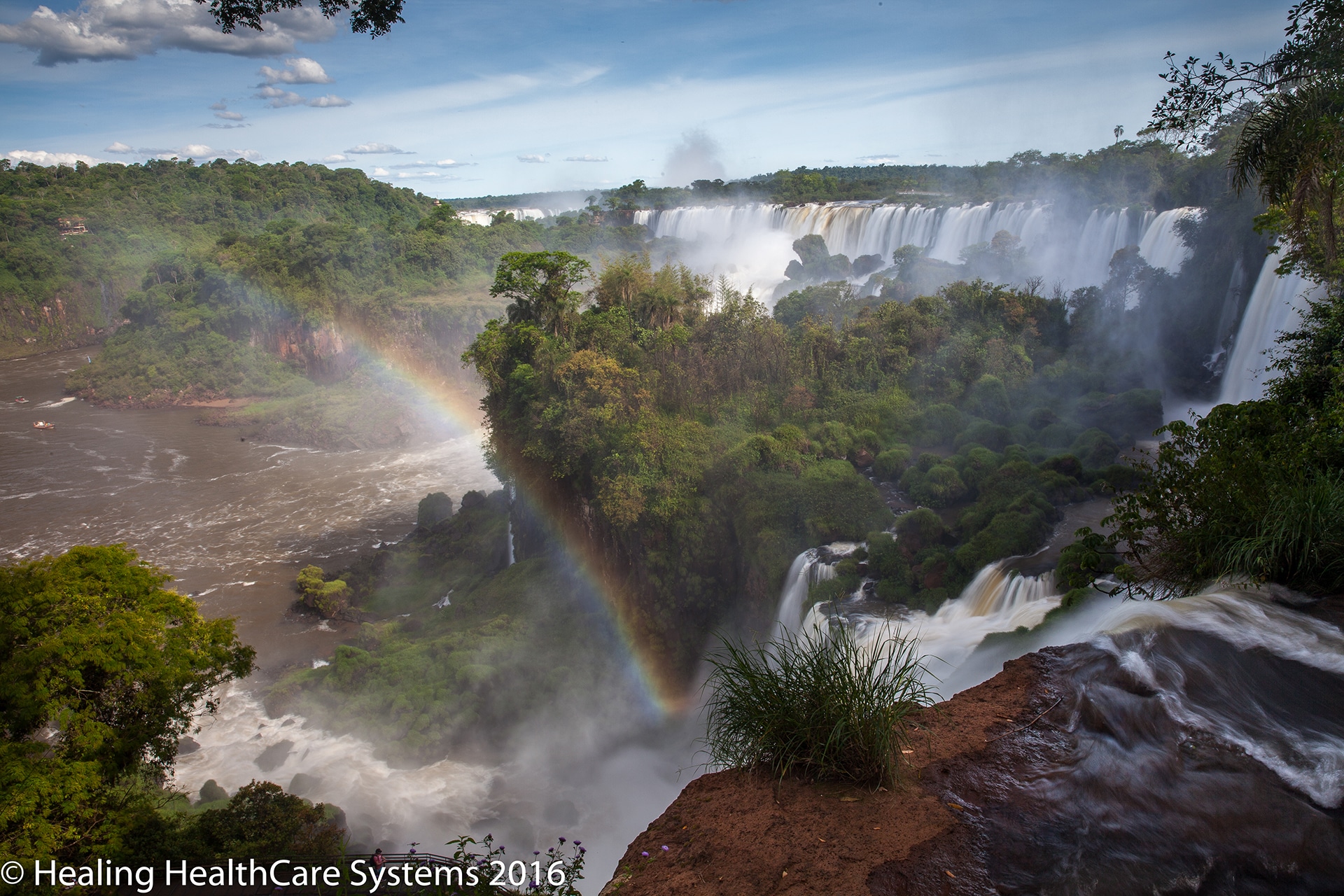 From here it was another 30 minutes down the tracks to the next major attraction, the Devil’s Throat. 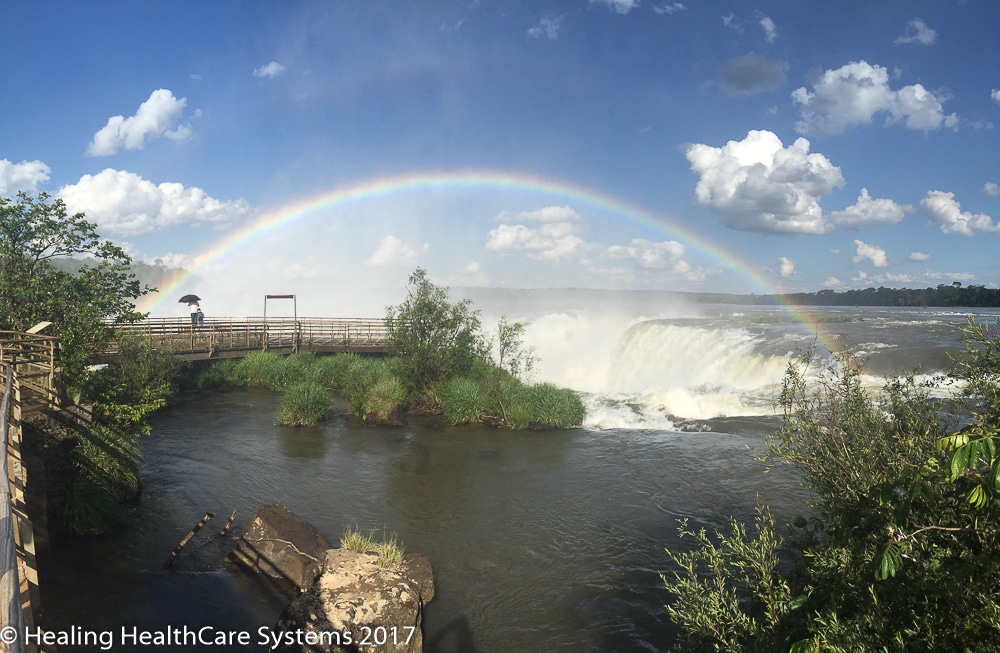 From the Argentinian side, there is no possible way to do this part of the falls justice. Let me start by saying you have a half-mile hike over walkways — ON the river. The walkway system in itself is an engineering wonder. 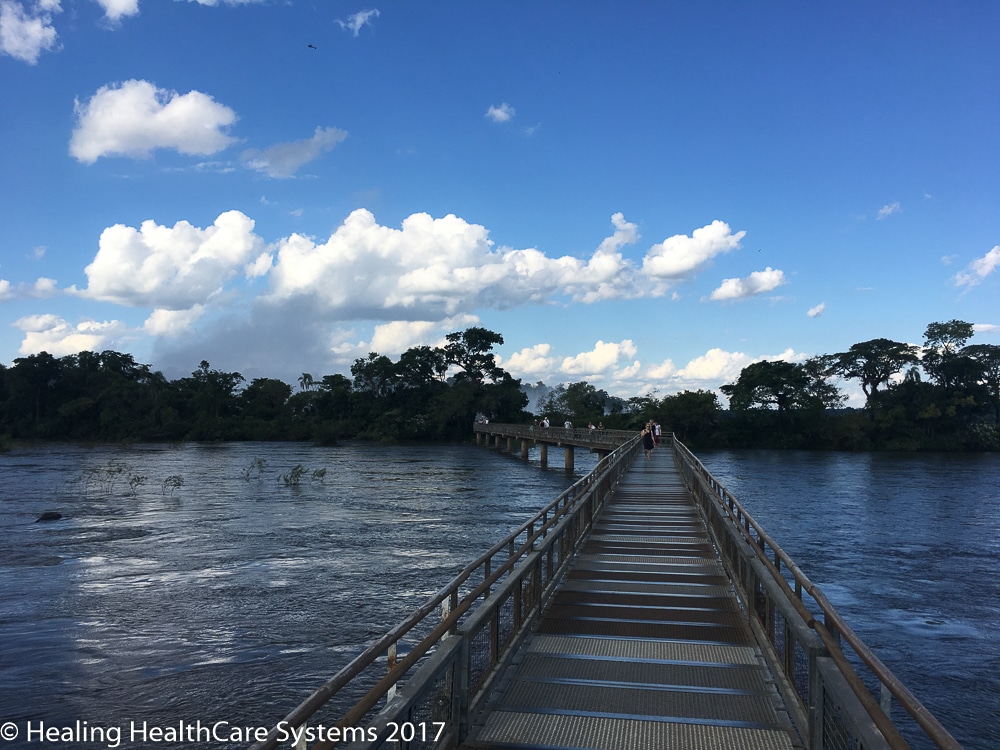 As for the Devil’s Throat, it is impossible to capture it on camera — not only because you are standing right on top of 300-ft. tall, but 500-ft. wide, U-shaped waterfall that spans almost a half-mile, but also because of the spray. 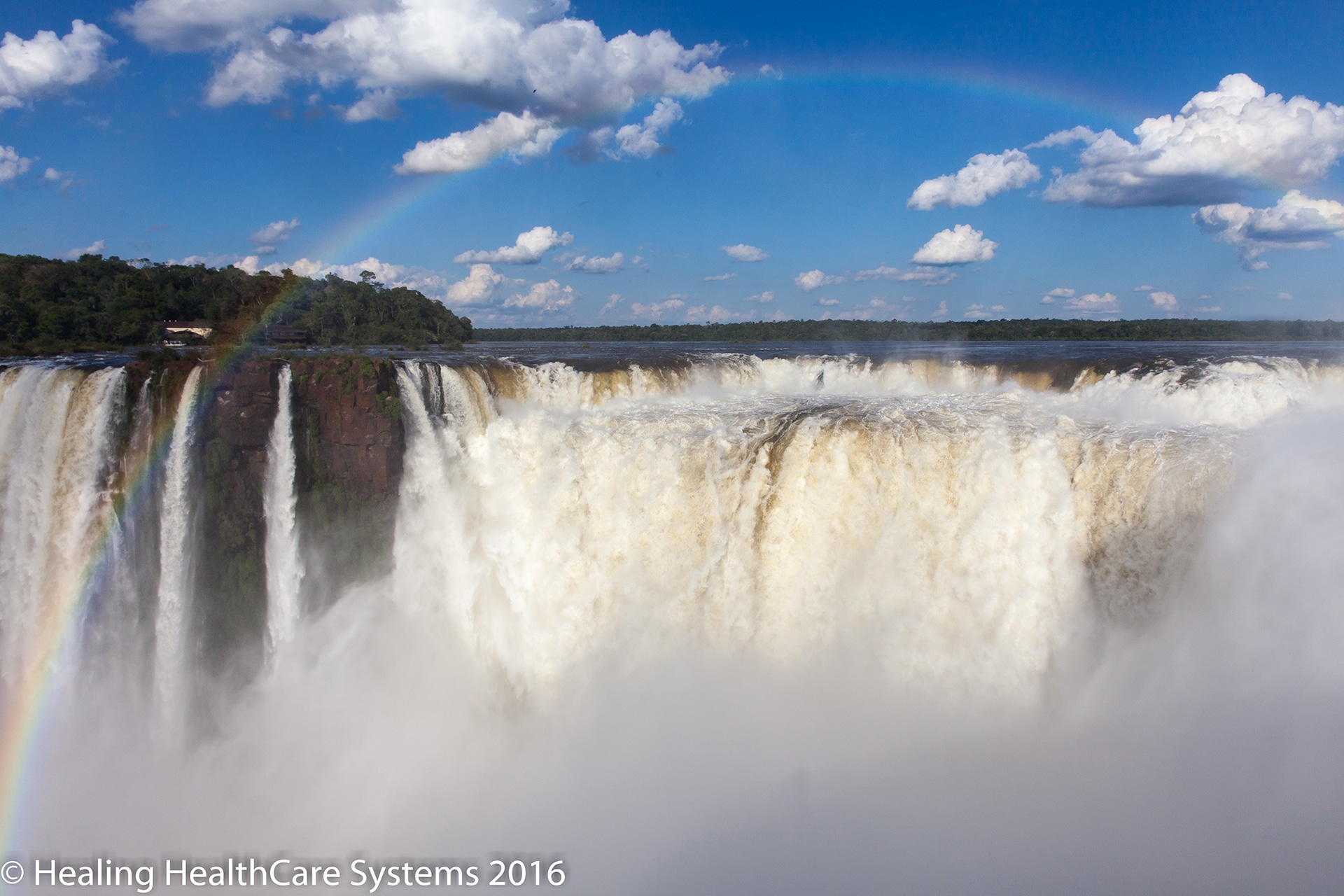 The spray rises a 100 feet into the air and comes down like a torrential rain. It’s worrisome to even have your iPhone out. It was like shooting in a ginormous open air shower.

The power is just insane. It’s deafening. You can hear it and feel it in your feet long before you see it. Looking down into the cavern was like looking into the abyss.

Just a haze of white and a rainbow that stops just short of completing a full circle.

With that experience in mind, we were excited to check out the Brazilian side of the Devil’s Throat where you literally walk out into the middle of it. We also knew it would be challenging to get a shot.

The walk down along the river provided a nice, larger perspective of the falls.

As expected, the Brazilian side of the Devil’s Throat was more experience than photographic. There was just far too much spray and it was just crawling with people on these narrow walkways. But it was incredible to be so close to so much water rocketing off the cliffs. 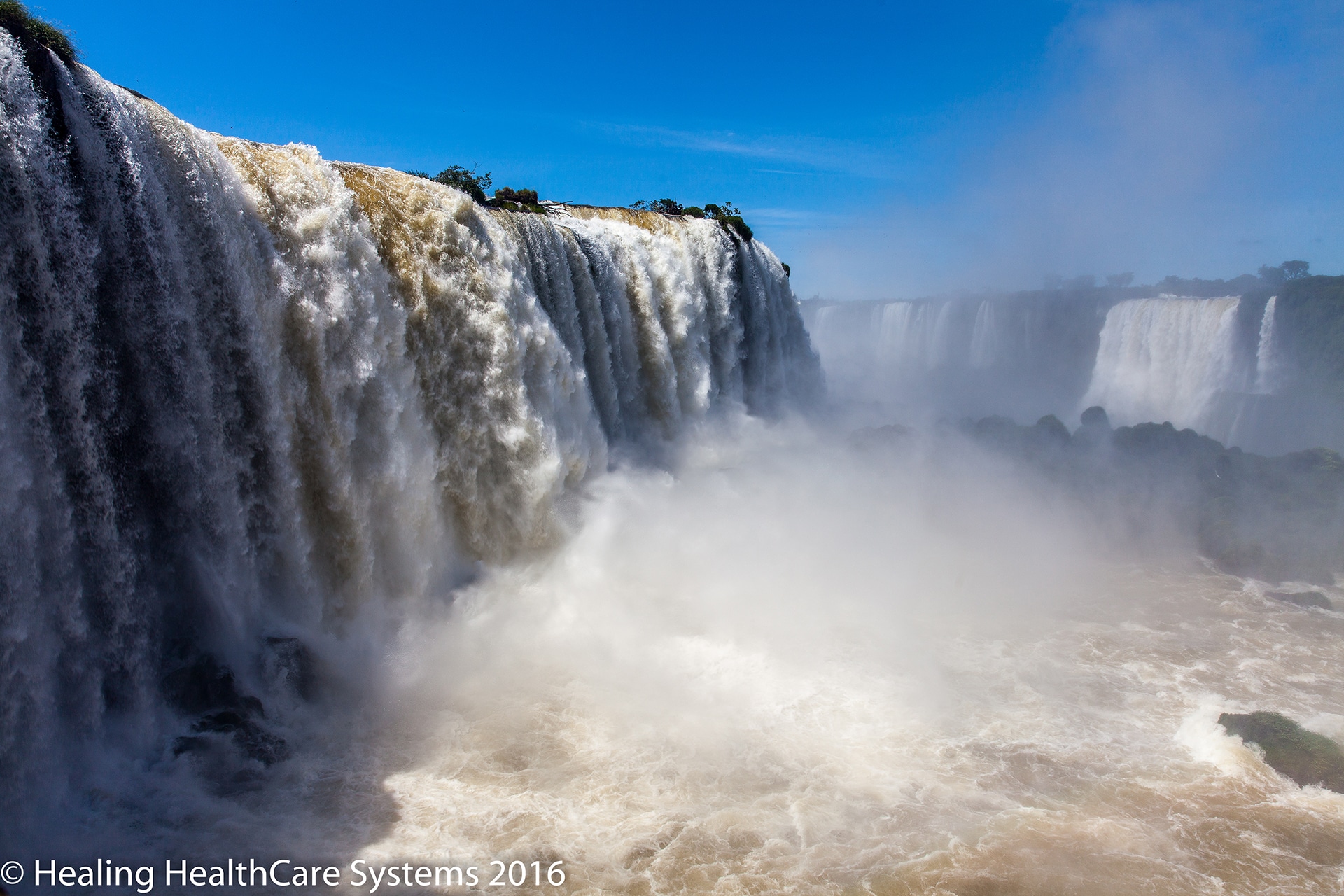 Before we knew it, our two days were up. (We’ll skip over the part where I blew up the power in our hotel by plugging an American power strip into a 220v outlet causing repair guy to come and use his screwdriver to gouge the 110v outlets wider to fit our improper adapter kit — making me realize I should probably learn CPR– and say that it was a smooth section of the trip.)

Next it was onto El Chalten in Argentina. 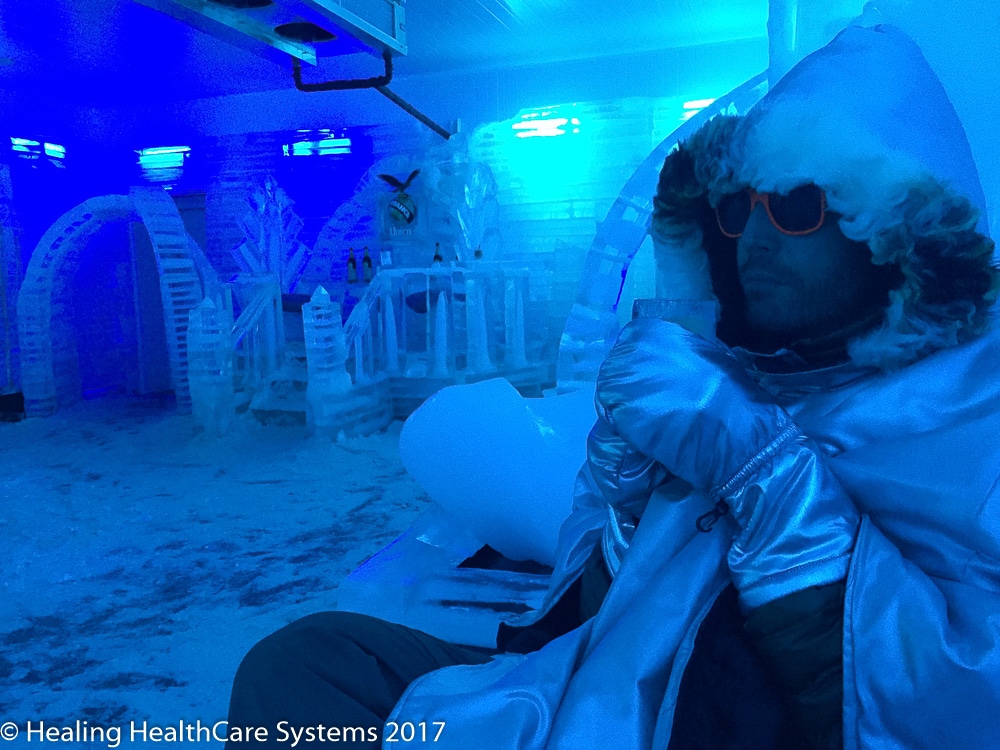